A tale of two women out to provide paradise to widows

In 2012, Rosemary Orwa became a widow for a second time, after losing her second husband in a tragic road accident exposing her to a fresh round of verbal and physical abuse from her late husband’s relatives.

Ms Orwa now, 40, witnessed a similar treatment in 2009 after the demise of her first husband making these abuses normal to her.

She was not given even a chance to bury her beloved husband and was forced to pack up her belongings and head back to her parents’ home in the tiny Wagoma Village; Bondo Sub County after her husband’s relatives accused her of bewitching their son.

Ms Orwa had not bore any child in both the marriages, further complicating her relationship with her close family members and friends, and they viewed her as a woman filled with evil spirits following the unclear circumstances surrounding her two husband’s deaths.

In an interview with Nyanza Digest, she said that her second husbands family started referring to her as ‘mgumba’ , loosely translated to a woman possessed with bad omen associated with the sudden deaths of her husband’s within a short time of marriage without conceiving.

In the Luo traditions and cultural believes, elders referred to women whose husbands died under mysterious circumstances without conceiving a child as ‘black widows’ who should be excommunicated from the community.

This is what befell Rosemary upon the elders getting wind of her story that she had lost two husbands within a short stint of time thus the elders at her paternal home burnished her from the community.

“After the death of my first husband I came face to face with domestic violence widows’ face in the community. The same frustrations were repeated after the sudden death of my second husband and the public viewed me as a bad omen that is out to finish the society,” said Ms Rosemary.

Ms Orwa is currently running the RONA Foundation located at her rural Wagoma Village. A foundation charged with the responsibility of protecting widows and orphans against social injustices and public ridicule as well as offering social- economical empowerment.

The foundation has also joined hands with other partners including Power Woman International run by Mrs Nana Wanjau, a partnership that provides widows within Lake Region and Nationally with moral support and decent housing as most of them are living in deplorable conditions upon the demise of their husbands.

Ms Orwa admits that many widows nationally are faced with a myriad of challenges including participating in outdated cultural practices such as cleansing and forced inheritance in order for her to be accepted back into the society. 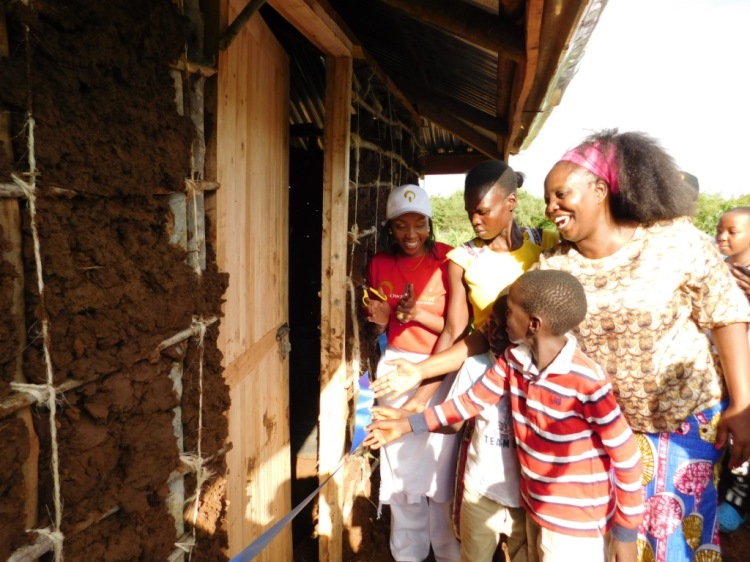 Ms Orwa and Mrs Wanjau (in red Tshirt) and beneficiaries of the two organizations majority being widows join Mrs Akinyi (in yellow )and her sons into their new house. Photo by Nelcon Odhiambo.

The Journey to starting RONA Foundation

Ms Orwa was forced to moved to the capital (Nairobi) upon her refusal to be cleansed and inherited as the Luo cultural traditions dictates, leading to her excommunication from both her marital and paternal families leading to the demolition of her marital house.

“I was stigmatized by my own family after I refused to be cleansed, practices which entails ‘shaving of the hair’. My husbands’ family also burnt down my house and took back my dowry payment on learning that I would not be inherited,” said Ms Orwa.

In the capital Ms Orwa started a tailoring shop, where she came face to face with the challenges facing widows who were subjected to similar public reducible and torture she faced after the death of their husbands.

The women harrowing experiences led to the birth of the foundation in 2013, she used the foundation to reach out to Counselors and Lawyers who would provide the women Guidance and Counseling on matters ranging from Legal, Social, Psychological, Emotional Counseling and Human Rights advocacy to the women on a weekly basis.

According to statistics from the Ministry of Health, on the spread and control of HIV/Aids in Kenya, it indicates that 75 -85 percent of new cases in the Lake Region is as a result of outdated cultural practices which include cleansing and wife inheritance.

The study further reveals that counties along the Lake Victoria namely Homabay, Kisumu, Siaya, Migori and Busia have the highest HIV/Aids prevalence rate compared to the national prevalence which stands at 16 percent.

“Outdated cultural practices such as wife inheritance contribute to 75- 85 percent of new cases of HIV/ Aids in the Lake Region, if this is left to continue more children will be left orphans and thus dim their future,” stated Ms Orwa.

The RONA safe house supports over 10,000 widows’ orphans in Siaya County alone, it also has 18 branches spread across the country including Vihiga, Kisumu, West Pokot, Samburu, amongst others and is also receiving support from the Affirmative action fund.

Mrs Wanjau soft-spot for widows and orphans compelled her to start the Power Woman International in 2009 in order to safeguard them from oppression and domestic violence as she was also raised by a widow.

She adds that her foundation directly targets ostracised widows, who she believes are more vulnerable as they are compelled to abide to outdated cultural practices including wife inheritance, cleansing amongst other practices.

“The idea started way back in 2009 while I was president of Rotary Nairobi West, and was approached by a group of widows who shared with me their plight; I felt their plight since I was raised by a widow, my granny from Bukoba in Tanzania,” said Mrs Wanjau.

Mrs Wanjau added that ‘Power Woman’ was officially launched in 2016 with four key pillars namely Affordable Housing, Economical Empowerment, Counseling to the widows as well as providing Education to their children.

She stated that the foundation has since built over 20 decent houses to widows across the country and it intends to build more houses after entering into partnership with well wishers and hopes to directly support over 10,000 beneficiaries in the coming years.

“Power Woman began with one beneficiary Grace from Uyoma in 2016; the organisation has since transformed the once gloomy face to a jovial face by building her a house as well as economically empowering her,”

“We have partnered with other organisations’ such as RONA, Chandaria and other donor companies that are dedicated to support our motto and four pillars including provision of Guidance and Counseling, Decent Housing, Economic Empowerment as well as Educating the widows kids,” added Mrs Wanjau.

Ms Orwa and Mrs Wanjau handing over a completed house to Eunice Akinyi a widow whose husband died a few years ago leaving her in a small dilapidated grass thatched house. Photo by Nelcon Odhiambo.

Mrs Wanjau who presented a house to a young widow Eunice Akinyi in a colorful ceremony in Wagusu Village, Bondo Sub County called upon more stakeholders to join in the initiative of providing shelter and a lifeline to thousands of widows in the country.

She said that this move will not only boost the well-wishers commitment of improving the lives of Kenyan widows but will significantly reduce poverty as well as ensure that all the widows children access quality education.

Mrs Wanjau who is mother to two boys empathized with Ms Akinyi and her 2 sons having lost a husband at a very tender age, adding that this move will ensure that she has a permanent roof over her head.

“As a way of improving the lives and empowering the widows and orphans like Ms Akinyi, more well-wishers and donors are needed to join-in in their support in the country and provide them with a decent life after the deaths of their husbands who in most cases are bread winners,” said Mrs Wanjau.

Ms Akinyi a house beneficiary thanked Power Woman International for the good job and asked the founder to continue providing shelter and economic empowerment to other widows in the country.

She said that the move has given her a lease of life after the sudden death of her young husband who had left her without a house.

“I had lost hope in life but this move by RONA and Power Woman international has given me a new opportunity in life, I thank God for your good deed, you will be blessed,” said Ms Akinyi who will now have a roof over her head.